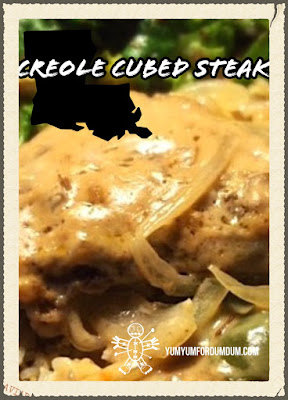 Cubed steaks are inexpensive and can be delicious if cooked right. Believe me I’ve had a lot of chewy cubed steak in my lifetime. Now I usually cook them in a crockpot for 7-8 hours covered in either golden mushroom soup or a couple cans of stewed tomatoes to get them tender.

I recently purchased some Creole spices. Do you know the difference between Creole and Cajun spices?

Cajun seasoning relies on the use of many peppers, such as white and black pepper, bell peppers and cayenne peppers. This cuisine also incorporates paprika and garlic. The use of onion and celery is also common in Cajun cuisine.
Creole cuisine is influenced by people born to settlers in French colonial Louisiana, specifically in New Orleans. Creole foods are a combination of many different cultures, from French to Irish to West African. Creole seasoning primarily relies on herbs like oregano, bay leaf, basil, thyme, rosemary, parsley and paprika.
Creole seasoning vs. Cajun seasoning really comes down to one question, do you want something spicy or something seasoned? If you want spicy, you’re more likely to enjoy Cajun foods. If you want something well-seasoned, opt for creole.

The Creole spice I purchased (Tony Charchere’s French Creole Cuisine More Spice Creole Seasoning) has salt, red pepper, black pepper, chili powder and dehydrated garlic. I really liked it on my salmon, so I’m going to try it in this recipe. Serves 10 Total Time 1 hour 50 minutes. I’m going to cut this recipe in half

In a skillet heat with a 1/2” of the oil over med/high heat. Season steaks with salt, pepper and garlic powder, to taste. Make sure you season both sides. In a pie tin mix the breading ingredients together then dredge both sides of the steaks through the flour. Brown steaks 4 minutes on each side, remove to a paper towel.

In a bowl whisk together the gravy ingredients. In a casserole dish layer the sliced onions first, then the green peppers, top the peppers with the cooked cubed steaks then cover with the gravy. Tightly wrap in foil and cook an 1hr to an 1hr 20 minutes.