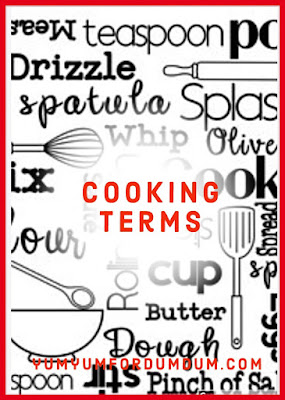 Blanch: a cooking process wherein the food substance, usually a vegetable or fruit, is scalded in boiling water, removed after a brief, timed interval, and finally plunged into iced water or placed under cold running water (shocking or refreshing) to halt the cooking process.

Bain-Marie: a container like a saucepan holding hot water into which a pan or bowl is placed on top for slow cooking. An example would be a bowl on top of a pan to melt chocolate.

Deconstructed Food: refers to the idea of breaking apart
elements traditionally combined together to make a dish, and serving the items separately in a unique way.

Étouffée is a dish found in both Cajun and Creole cuisine typically served with shellfish over rice. The dish employs a technique known as smothering, a popular method of cooking in the Cajun areas of southwest Louisiana.

Frond is the leaf or leaflike part of a palm, fern, or similar plant. This term was used in the Sweet and Sour Pork Tenderloin recipe.

Temper: A cooking technique in which the temperature of a cold/room-temperature ingredient is slowly raised by adding small amounts of hot/boiling liquid. The hot liquid must be mixed in gradually to prevent the cool ingredient, for example eggs, from cooking further.

Flambé: is a cooking procedure in which alcohol is added to a hot pan to create a burst of flames. The word means 'flamed' in French.

Fond: is French for "base" and commonly refers to the browned bits and caramelized drippings of meat and vegetables that are stuck to the bottom of a pan after sautéing or roasting.

Chiffonade: a preparation of shredded or finely cut leaf vegetable, used as a garnish.


Maceration: In food preparation, maceration is softening or breaking into pieces using a liquid. Raw, dried or preserved fruit or vegetables are soaked in a liquid to soften the food and/or absorb the flavor of the liquid into the food.

In the case of fresh fruit, particularly soft fruit such as strawberries and raspberries they are often just sprinkled with sugar  (and sometimes a small amount of salt) and then left to sit and release their own juices. This process makes the food more flavorful and easier to chew and digest.

Maillard Reaction: is a chemical reaction between amino acids and reducing sugars that gives browned food its distinctive flavor.

Rendering: to cook the fat out of, like bacon. Then use the fat (bacon grease) for cooking or adding it other foods. Like Hot Bacon Vinaigrette. Yum Yum!

Braised: To fry (sear) food lightly, then stew it slowly in a closed container (crockpot/slow cooker).

Brine (verb): Soak in or saturate in salty water. When brining, keep the food at a temperature of 39º F or less so bacteria is not allowed to grow. An alternative to adding salt to the water is to rub a salt or a salt and seasoned mixture over the entire piece of food being brined. Then place it in the water, allowing the salt to desolve as it brines. After brining is finished, wash the excess solution off the surface of the food, discard the used brine (never reuse) and begin cooking

Umami:   or savory taste, is one of the five basic tastes. It has been described as savory and characteristics of broth and cooked meats. The other 4 categories of taste are; salt, sweet, sour and bitter.
DeGlaze: dilute meat sediments in (a pan) in order to make a gravy or sauce, typically using wine.