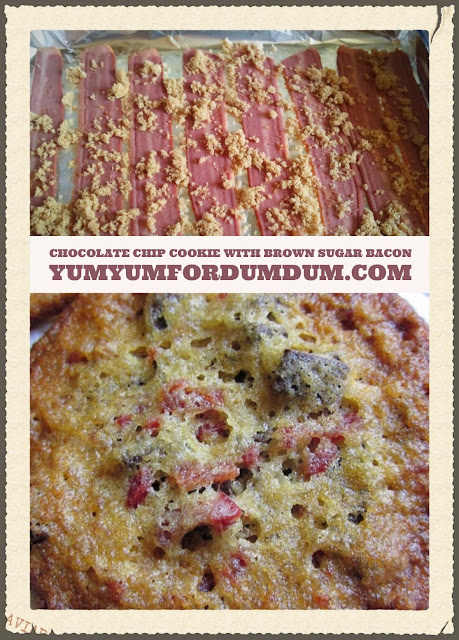 I was watching a baking show on Netflix last night called Sugar Rush and one of the contestants put brown sugar on some bacon and baked it in the oven. I didn’t know you could do that. Dum Dum.....Let alone put brown sugar on top, which sounds absolutely delicious.

I had to figure out what I would do with brown sugar bacon and low and behold, what would be better than putting it into a chocolate chip cookie!  Don’t you agree? Pretty smart smart, if you ask me. Makes roughly 3 dozen. (BTW this is my 350th recipe...Yeah😺)

Let me know what recipes or dishes you use brown sugar bacon.

2.  Then remove the bacon from the oven and let it cool before chopping. **Note – we used turkey bacon. It tasted good, but it doesn’t crisp up as much as regular bacon would have so it was a bit chewy. However, it still works if you need to make the substitution.

3.  Once that’s ready, you can start on the cookie dough. Turn the oven down to 350F, and line or grease a couple of baking sheets.

4.  In a small bowl, whisk together the flour and baking soda, then set aside.
5.  Cream your butter and sugar together in a large bowl. While that’s going, mix together your egg and vanilla. Then add the egg mix into the creamed butter and sugar. Slowly add the flour mixture to the butter and mix until almost combined. Scrape down the side of the bowl as needed. Then add in your chips and bacon and mix until incorporated.
6.  Place tablespoon-sized balls of dough onto the prepared baking sheets about an inch and a half apart.  Bake for 15-18 minutes, or until the cookies turn a nice golden color. Make sure you check on your cookies during baking. When done remove them to a rack to cool a bit before eating. Yum Yum!
Posted by Yum Yum for Dum Dum at 5:54 PM