What is a frittata? It’s a crustless quiche. Great for any meal because you can add practically anything to them from different cheeses, to vegetables and meats. Best to cook a frittata in an oven proof nonstick skillet because this recipe requires you to bake it for 10-12 minutes in a 375 degree oven to set the eggs. I’ve found out the hard way, when trying to make a quiche, this is the tricky part. I was a Dum Dum and went overboard with the vegetables, which made it harder to set the eggs in the middle. A lesson learned. Use this recipe as a guide. Serves 8

Preheat the oven 375F. In a large bowl whisk the eggs with salt and pepper to taste. Add in the cheeses and stir to combine. Set aside. In your ovenproof nonstick skillet on med/high heat melt the butter add the onions and cook them until they are tender and golden brown. Add the cooked cubed potatoes, stir, add the spinach, stir and finally add in the peppers and the olives. Stir to arrange the vegetables evenly in the pan. Pour in the egg mixture making sure it’s distributed evenly in the middle as well as the sides of the skillet. Keep the skillet on the burner for 30-45 seconds to set the edges before putting it in the oven for 10-12 minutes to set the eggs. Keep an eye on it so it doesn’t get too brown on top. When done, slice and serve. Yum Yum!


Aww..Buddy’s so comfy I hate to move. 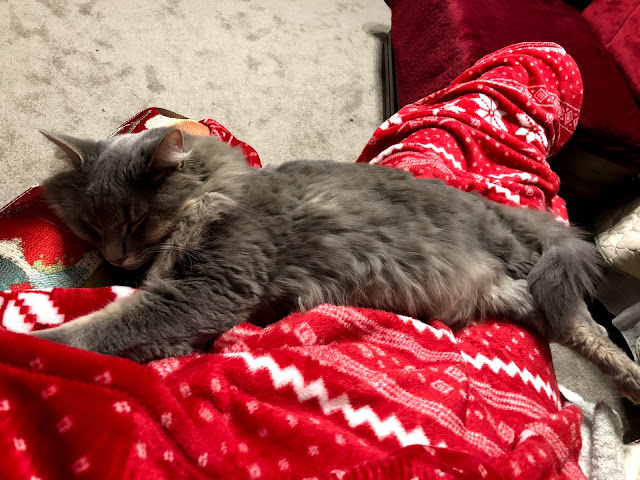